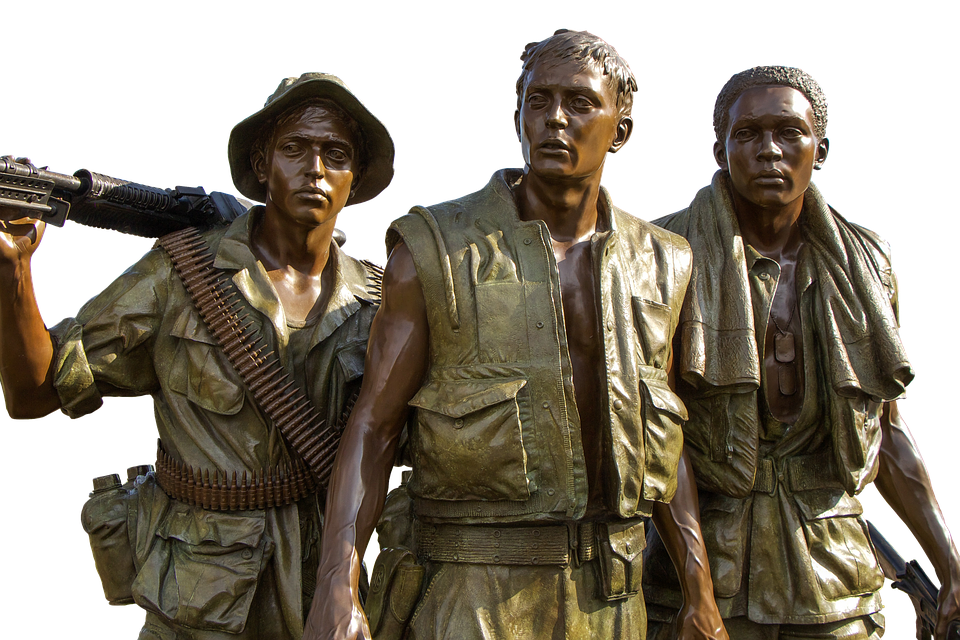 I am a fifth generation veteran. My predecessors, in addition to myself, participated in the following conflicts: the American Civil War, the Spanish-American War, World War 1, World War 2, and the Vietnam War.

I comment on this not because I like war. On the contrary, I joined the U.S. Coast Guard because I believed I could serve my country without fighting in Southeast Asia; in a war that I did not believe in. How wrong I was. After I enlisted, I found out that there were Coast Guard units in Vietnam— Squadron One and Squadron Two in particular, and maybe more.

I did not go to Vietnam. I was involved in search and rescue, lighthouse duty, and 18 months on a sea-going tender out of Sitka, Alaska. We guarded the sea lanes and the Pacific Ocean fishing limit, (I can’t remember if it was 20 miles or 200 miles offshore.) and we chased ships that were fishing illegally…including some stubborn North Koreans, who gave us quite a run at the time. No, I didn’t see combat in ‘Nam—I was what was known as a “Vietnam Era” vet. Yet I still faced critics and haters of me as if I were Lt. Calley himself— critics and haters of me who didn’t even know me personally save for the uniform I wore. (Which was an irony in itself)

However, when the Yom Kippur War broke out in the Middle East in 1973, our crew still went to Alpha Status, prepared at a moment’s notice to go there. Yep, “Semper Paratus” (“Always Ready”) and all that. I guess that was always in the back of my mind.

But people are kinder today…free meals at restaurants on this day…salutes from the media…and I’m grateful for that. But there are a host of individuals who served in all branches of the military and in all conflicts. Some volunteered because they believed in a cause—like my father who lost the back of both his lower legs in the South Pacific when the Japanese shore batteries fired back, He may have remembered what FDR said on December 8, 1941,”…the United States of America was suddenly and deliberately attacked by naval and air forces of the Empire of Japan.” Also my grandfather who during World War 1 served on the USS Texas. Why would he participate in a war with a nation half a world away? I believed he did this “escort duty” across the Atlantic Ocean because of the u-boats—the German “Wolfpack” submarines who sank the civilian liner Lusitania in 1916. This resulted in the loss of many lives including Americans who for the most part had no quarrel with the German nation.

As for my great-grandfather, I don’t know his motives. I don’t believe he was a warmonger…but there was a cause in Cuba and the Philippines against Spain who was believed to be a tyrant by much of our nation—not to mention responsible for the explosion on the USS Maine. All this feeling, directly or indirectly, could have been a result of the news media of his day. (That means you Mr. Hearst.) What a lesson for the news landscape of our day.

And recently, I found out about the man I believe was my ancestor serving in Maryland during the Civil War. For a Union soldier from Massachusetts at that time, there was plenty of reason to serve to go around.

Actually, I can’t say I know the motives of any of my ancestors. No one completely does. But I do know that they always faced the real possibility of being killed. Even though my own father was saved from Pearl Harbor due to an order for repairs to his ship near Seattle, Washington, he like I was always faced with the reality that we had taken an oath and that no matter what, we had to accept the risk of never coming home (except perhaps in a body bag). This is the reason we celebrate Veterans Day. Memorial Day is to remember the fallen and it is my duty to respect and honor them at cemeteries, with poppies , and displaying my flag at home. Regarding both, like the saying goes, “All gave some…some gave all.”

November 11 was first Armistice Day in 1919 because the “War To End All Wars” ended. But then we came to find out that wars unfortunately continued. Tyrants rose and so did their armies, and no matter how much we desired peace and quietude, someone would bully, make demands and cause the need for severe justice. So more needed to serve and more veterans were counted…alive and dead.

You see, one way we look at the word “veteran” is someone who has been in a time and place and gained experience. It’s kind of like “…been there and done that.” But this Monday, we remember those once in uniform who were willing to be somewhere and do something necessary to keep the gears of our constitutional republic oiled and going for the sake of a free people, whether they felt like it or not. Veterans did what they did because they believed it was the right thing to do. If it wasn’t, a compassionate God in Heaven, who hears prayer, can fix all things!

My uncle once told me that the ones who did not survive the war were the true heroes…and yes, in a profound way they were. As Lincoln said, “…they gave their last full measure.” But we who are here today are heroes too. And we have the completed DD-214 forms to prove it.